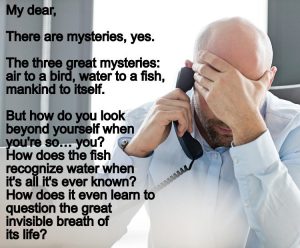 1. Two young fish are swimming in the lake and they pass by an older fish that is swimming the opposite way. The older fish nods at them in greeting, and says, “Morning, boys. How is the water?” The two young fish swim on for a while, then one of them looks over at the other and asks ‘What the hell is water?’

OK, that is one story about water… and self-awareness.

2. The second story comes from a book I haven’t read and probably won’t. But the question is fascinating:

3. And here is the third story: what I really want to write this article about: END_OF_DOCUMENT_TOKEN_TO_BE_REPLACED